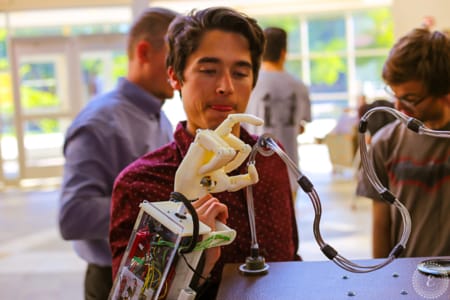 A lot of you must be familiar with the term ‘3D printing’. It has caught on over the last few years, it did because it is the future of manufacturing, especially additive manufacturing. There are groundbreaking things being achieved with this technology, the latest example was of the  6 month old baby getting saved by doctors who designed and printed a stent before the actual operation. It will not come as a surprise when 3D Printers become a part of our daily lives.

What is additive manufacturing?
Additive Manufacturing is the process in which objects are formed by adding material to build the final product layer by layer. The alternate traditional method is the subtractive manufacturing in which material is removed to form the final product. Additive Manufacturing has opened new capabilities which were impossible before due to outdated methods. Though AM was introduced in the early 80’s, it is still improving with each passing day. This advancement also includes the type of machinery, methods and material.

FDM
There are now a handful of different types of AM technologies to choose from. The most common and simple method is called Fused Deposition Modeling. The technology helps in heating up the thermoplastic, sticking the material together like hot glue layer by layer, it also cools down as soon as it is deposited. Once the entire cooling process is over, the hot material has solidified into the desired geometry.Though this technology is the cheapest in AM, it is also with the lowest resolution.It is great if you require structural prototypes and high volume production, but may fall short for small parts with intricate details.
SLA

Stereolithography uses a base material i.e.liquid resin and cures the material via UV light layer upon layer. It is comparatively more expensive than FDM, though the detailing and resolution are significantly higher. The FDM counterpart is thermally & mechanically more stable than the material composition of SLA. This technology is best suited for fine detailed, non-functional and small prototyping applications.

SLS stands for Selective Laser Sintering. It is the process of fusing particles together using lasers. SLS is mostly used for printing in metals, and by nature is significantly more expensive than both FDM and SLA printing technologies. SLS has a slightly lower resolution, and also requires extensive post-production processing of the parts to become functional. You commonly see firms using SLS for complex aerospace and automotive applications.
There are other types of additive manufacturing methods including DLP and CLIP. These are usually evolutions of one of the original three AM methodologies listed above. They are Mostly the derivatives of Stereolithography, which utilizes alternate catalysts for solidification to improve manufacturing throughput.
Industries of different scale, be it small or large are using 3D printers for multiple reasons. Some of the uses are:
Cheap and fast prototyping (i.e. an enclosure for an electronics board you’re building)
Architectural purposes like marketing, design validation, end use and so on.
One of a kind designs such as statues and figures.
Products for the end user via mass customization.
Complex jet engines which previously were made of twenty plus parts, are now condensed into a single build.

In the medical field for customized prosthetics.
IoT, wearables and many more applications.