As 3D printing is increasingly being adopted as a tool used beyond rapid prototyping, businesses will be eager to learn how to incorporate it effectively. A company may not want to or be able to immediately jump into full-fledged additive manufacturing (AM) of end parts, however.

The Birth of AM at Caterpillar

The history of 3D printing at Caterpillar reflects, in some ways, DelVecchio’s own history with the company. “In 1991 we got our first stereolithography machine,” DelVecchio explained. “It was in our rapid prototyping lab. We created this rapid prototyping lab that has been around for years. Most of our engineers saw our rapid prototyping lab and used it. It wasn’t a technology that a lot of people could get any other way. So, we did fit up, we did visualisations, we did some beautiful models. It was all around me, and it still is for over 25 years.

Over time, however, Caterpillar sought to expand the use of AM throughout the business more broadly, particularly as the technology matured. “There’s nothing wrong with rapid prototyping and visualisation, but what we decided was actually critical was to use an additive to move to the next level from an innovation perspective,” DelVecchio told the audience at AMUG.

The question for her, however, was “How in the world do you do that when you have got all these employees—about 100,000 employees all over the place?” 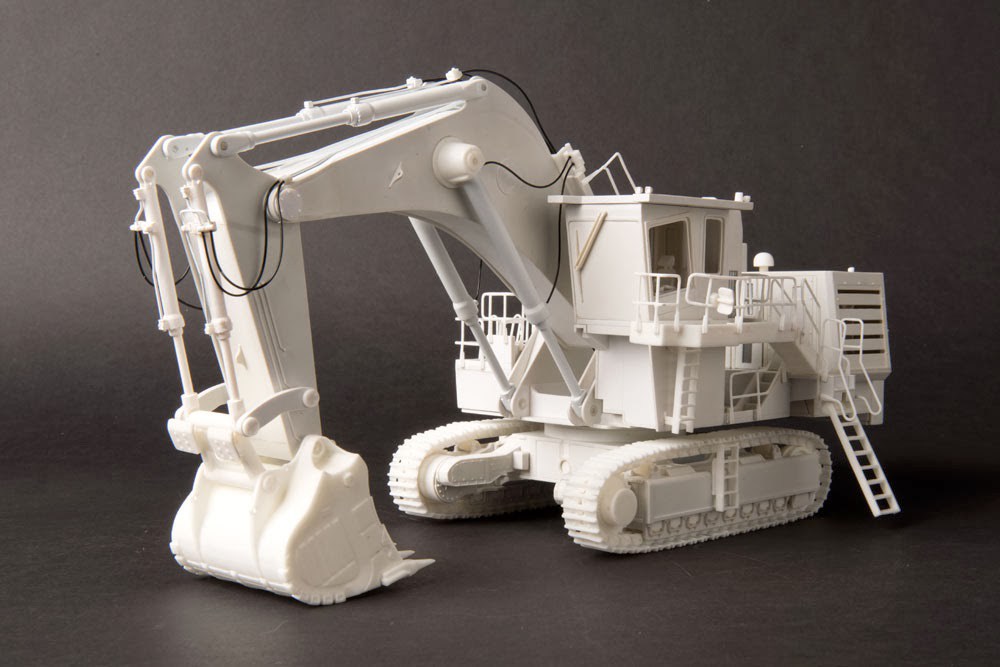 With Caterpillar having such a large global footprint, DelVecchio explained that the answer was to start small—a strategy that the company has learned to implement as it began manufacturing giant, expensive machines that are meant to hold up reliably after hours of intense work in the field. This means launching test pilot programs and working with early adopters on products before their widespread implementation.

This resulted in the “Nomadic Printer Program,” as DelVecchio referred to it. A forward-thinking executive at Caterpillar instructed DelVecchio’s team to purchase AM systems without a concern for return on investment, leading to the purchase of six industrial machines, including uPrints, Fortus 250s, an Objet printer and an HD Max.

The printers were delivered to Caterpillar manufacturing facilities throughout the United States, where local engineers were given permission to experiment with the technology in any way they wanted. Although DelVecchio said that there were some successes from the program, she also had engineers calling up and asking her, “Hey, Stacey, what do you want us to print with your printer?”

In order to more formally educate Caterpillar employees and engineers about the technology, the company hosted an AM summit, made up of sessions and presentations that were designed get teams thinking more seriously about the technology. DelVecchio said that this will evolve into a more directed approach to AM this year with the introduction of “Design for Additive” workshops, in which Caterpillar team members who already understand the need for the technology will begin work on actually designing for AM in order to solve specific problems.

To further engage its employees in this mindset, Caterpillar hosted a design competition, asking engineers to go beyond 3D-printed jigs and fixtures and, instead, focus on end parts that would be improved with AM. The winning design was a ball check valve that combined multiple components of an assembly into a single, metal 3D-printed part. This initiative will be expanded this year into four or five different competitions.

Since its inception 25 years ago, the rapid prototyping lab has evolved, too. Last year, Caterpillar officially cut the ribbon on its Additive Manufacturing Factory. The site is located at Caterpillar’s Global Research & Development Center in Mossville, Ill. This installation provides the AM innovation group with access to and inspiration from the R&D group but also exposes the AM factory to the public and executives that tour the facility regularly.

The factory features 10 industrial 3D printers, including a Carbon M1 3D printer, and a MicroFoundry. For the first six months, Caterpillar’s 3D printing technology was open to employees for free, until the novelty of free 3D printing services caused an unnecessary increase in demand. This led to a material-only model.

“We did then go to a material-only model, which I personally think is good for if you’re early on the journey,” DelVecchio said. “It makes it so that people have a little bit of skin in the game. The material cost is just pennies, but it’s not the fully burdened cost.” The facility now charges a “fully burdened cost,” which accounts for the post-process labour, the rent that the factory pays, and the cost of the machine.

The Future of AM at Caterpillar

So far, AM has already begun to have an impact at Caterpillar, and DelVecchio expects that impact to increase. Through its Solar Turbines subsidiary, Caterpillar is manufacturing its first end part, a fuel swirler with a unique geometry. Surface tools and prototypes have also been 3D printed by the company. With its M1, Caterpillar was able to 3D print an elastomeric grommet for its aftermarket business, which DelVecchio said is not only essential to the company at large but will also play an important role in its AM strategy going forward.

In one project, Caterpillar 3D printed 36 different track links before moving to end production, saving $160,000 in time and labour.

“[The aftermarket business that we have] is integral to our business model,” DelVecchio said. “We will support equipment 25 years after it goes out of production, and some of our parts are in production for a really long time. It’s not unusual for us to be supporting something that was designed 50 years ago.”

To effectively address this and other aspects of the business, the company is looking at digitising some of its inventory with 3D scanning and, ultimately, creating a virtual inventory. There is still work to be done on that front, however.

Caterpillar is also looking into partnerships to further its entrance into the AM space. This includes its recent partnership with FIT AG, which will see the two businesses work together over the course of a three-year contract to 3D print aluminium and titanium parts. Beyond FIT AG, Caterpillar is seeking out suppliers, universities and other organisations that might drive it’s AM innovation forward.

DelVecchio believes that Caterpillar’s investment in AM will make the company more flexible, enabling innovation on even the biggest machines. Before making the jump to end parts, however, the company went down a long road to get there. A lesson for other big businesses considering a broader implementation of the technology, then, might be to think big, start small and act fast.

Credits:More about 3D printing at CATERPILLAR.